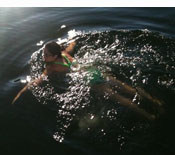 I learned to swim as a wee one from my dad, who didn’t really swim himself, but was tall enough and encouraging enough to send me back and forth to the side of a pool. There were also the terrifyingly wonderful trips on his shoulders out into crashing ocean surf, which instilled in me a fear and respect for the rising and falling, tempestuous beast, on whom he repeatedly admonished us kids to never, ever turn our backs. How could I, a small child with a giant dad, not also fall in love with this even more massive ocean, into which he so fearlessly ventured? The affair began with the Pacific Ocean, whose ill-tempered, icy waters off of Washington’s coast I have known since infanthood; by the time I turned eight, our bond was solidified: I had explored her warm, colorful reefs and pools off Fiji and Hawaii. What could be better?

Swimming at the Blue Hole in Egypt (PHOTO: Jeremy Laming)

Beginning at age seven, I spent a few years swimming competitively on a local Seattle swim team. I learned the four strokes, how to swim laps and do a flip turn, how to dive from a block and compete in meets. To this day I’m not sure why I stopped. I suppose as a twelve-year-old, “I don’t feel like swimming so much,” was reason enough. Aside from the occasional lap swimming for pleasure, and a few years of SCUBA obsession as a teenager, I didn’t really swim regularly again until I was in college, at which point I also became a lifeguard and swim instructor. Although an exhausting job, I happily taught swim lessons in Seattle for Safe N Sound Swim School, and then in Manhattan for Take Me To The Water when I first moved to New York in 2003. For the past 7+ years I have been working on dry land as an educator at a small Quaker school for students with Learning Disabilities in Brooklyn.

In late 2009, I joined the Brooklyn Triathlon Club, and began swimming with a local Masters program. Masters quickly became my favorite part of training for triathlons. After a season of Sprint and Olympic distance tris, I realized that my real love was still swimming, and a triathlete who is a proficient swimmer is really wasting her time if she spends too much of it training for the swim. So in January of 2011, I signed up for a 10-mile lake swim in Vermont in July, and a long distance open water swim training program in Malta in April, and got to training (and blogging about it). It was a great first season of open water swimming, during which time I came to know and love my open water swimming community, the CIBBOWS. I found myself with some relatively serious shoulder issues that led to surgery in the fall of 2011, but was back in the ocean by January. After a first season of winter ocean swimming, I am getting ready for another great summer of swims, including a 15.7 mile swim from the Tappen Zee Bridge to the George Washington Bridge on the Hudson River (part of the 8 Bridges Swim series), and a 2-person Ederle relay (17.5 miles from the Battery to Sandy Hook, NJ). Assuming all goes well with the shoulders this year, I hope to begin training for longer swims in 2013, including a solo Ederle swim and a swim around Manhattan.

I haven’t been at this too long, but I am learning a lot from my experiences in NYC and around the world, and the inspirational, legendary swimmers I have come to know along the way. I recognize that what I am learning is the kind of stuff that any new open water swimmer has to learn, so I figured it would be nice to share. I hope you enjoy reading.

Afterthought: While my first love will always be the Pacific, now that I am living and working in New York, I have fallen hard for the Hudson River and Atlantic Ocean.

9 thoughts on “About me”

Got this far? Please consider leaving a comment... Cancel reply

I learned to swim as a wee one from my dad, who didn't really swim himself, but was tall enough and encouraging enough to send me back and forth to the side of a pool. There were also the terrifyingly wonderful trips on his shoulders out into crashing ocean surf, which instilled in me a fear and respect for the rising and falling, tempestuous beast, on whom he repeatedly admonished us kids to never, ever turn our backs. Read more...

Worth a look, listen, watch, or read