Ocean Swimming Through the Winter

As the ocean water warms,
and the winter fades into memory,
I reflect on my first winter of ocean swimming… 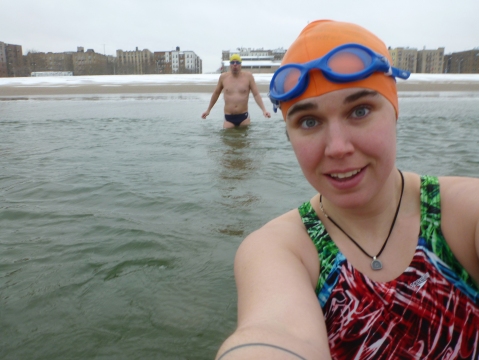 But first… I remember a skiing trip my family took when I was around 10 years old with a bunch of other families from Seattle. At night, while the parents sat together over boring drinks, recovering from a long day of keeping track of mittens and lugging skis around, we grabbed our swimsuits and ran outside. Just fifteen feet from the edge of the building, a mere four or five giant barefoot leaps through the snow, was a fantastic above-ground hot tub. 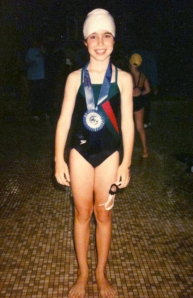 After splashing around and playing in it for a few minutes, we would find ourselves sitting on the edge of the tub with just our legs submerged, our small, overheated bodies relishing the fresh air that turned to clouds of white steam as it hit our hot skin. It wasn’t long before we were exchanging dares, and then organizing competitions to see who could hold their breath the longest in the tub, and then who could lie their freshly-boiled, nearly-naked body down in the snow for the longest before jumping back into the scalding water. The funny thing about this memory is that I don’t remember who the other kids were really, just that I was one of the youngest. What I remember very clearly is loving the competitions, and repeatedly winning them both.

I thought of this memory, and others like it, periodically through my 20s. As I had gotten older, I came to describe myself as “cold-averse,” and “easily chilled,” and I avoided the cold whenever possible. As I opted out of one cold activity or another, I wondered what happened to the fearless little girl who won those competitions nearly-naked in the snow.

A few years back, I went on a week-long dog sledding trip through the iced-over Boundary Waters of Minnesota, which I considered a significant step out of my cozy-warm comfort zone. I was well prepared with appropriate cold-weather gear, and I loved every minute of it. However, when offered the opportunity to jump into a hole in the ice, and then run back to a make-shift sauna, I laughed hysterically and thought, “Not in a million years.”

When I did my first triathlon on Staten Island in June of 2010, a friend showed up without a wetsuit and I thought she was crazy.

Xlendi Bay, Malta, 2011: Rounding the buoy at 4hrs10mins, sandwiched between new friends swimming with me for moral support.

Then, at age 30, I decided to start swimming far in the ocean and I signed up for a long-distance swimming trip in Malta. Of course it wasn’t until months later, after paying for both the trip and the airfare, that I thought to Google “What is 15 degrees Celsius in Fahrenheit?” It was then that I realized I was not signed up for a warm-water swimming retreat. What was I thinking? I had thought the challenge of distance sounded amazing (a six hour continuous swim?!), but the idea of doing it in cold water was a challenge I had not even considered, because, you know, I’m cold averse. I felt like an idiot for not researching it all earlier.

It turned out to be a life changing experience. For starters, I got a crash-course in open water swimming, of the Channel variety, and left feeling quite knowledgeable. That six hour swim was one of the hardest things I’d ever done, my body hurt (before I began!) and the water was cold. I swam for hours in a very dark mental place, but finished the swim feeling light, and inspired by the power of love and support of near strangers. I had conquered the cold, in a way, and apparently, in doing so, I had awoken that 10-year-old and her excitement for a good cold challenge. 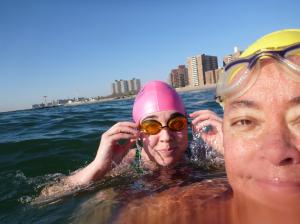 This January, at 31, I reconnected with my little champion-of-the-cold self. I began winter ocean swimming every weekend, in just my Speedo, even when it snowed. Due to shoulder pain, and subsequent surgery, I had been out of the pool and the ocean since August. My heart was aching for the water, and on the 1st of the year, I was ready to get back in, if not for an actual swim, then at least for a dip.

But, on January 1st, when CIBBOWS, Polar Bear friends, and hundreds of strangers descended upon Coney Island for the annual Polar Bear swim, I was on a plane flying back from Seattle. I would have to make my own plans. So on January 2nd, I picked up Laura and my friend Gabe in Park Slope, and headed for Brighton Beach. It was my idea, so I knew there was to be no chickening out. In fact, despite my apprehensions, I filled the car with upbeat, encouraging banter. I’m sure this is the first either of them are hearing of my doubts. In the warm car, I cringed at the thought of standing in the cold, winter air, in just my swimsuit. That was the part I was sure would be the worst.

January 21st, 2012 – The seagulls at Brighton Beach brace themselves against the wind as we shed our warm layers and prepare for a swim (my first snow swim!)

That first swim was short. Gabe, who had stories of his own ice-swim in college, was out of the water in an instant and getting back into his winter clothes. Laura lingered for a few seconds, but later admitted that she never put her head in. I was surprised to find it felt almost pleasant. I hung out for a few minutes enjoying the numb yet totally tolerable sensation, and then joined my friends on the sand. I was hooked. I started heading out regularly, and swimming between 15-20 minutes most weekends through January and into February.

The thing about swimming in really cold water is that it is so cold that it doesn’t feel cold. It feels weird. It feels a little like ice is forming in my fingers. That’s certainly a weird feeling. And my face hurts for a few minutes before I am able to hold it down and swim. Also weird. Usually, I got out because the people I was swimming with got out. I figured they knew better than I did, as they were all more experienced at winter swimming than I was. I often felt like I wanted to stay in longer. But the wisdom of getting out when we did was felt after each swim, when I sat in my car with the heat blasting, wrapped in my warmest winter clothes, shivering from a deep, inner cold, sipping hot tea. Every weekend at that moment I thought, this is crazy. I’m never doing this again. But come Thursday or Friday, all I could think about was getting back in.

Here are some notes from most of my swims this winter. With less traveling planned next winter, and no surgery (fingers crossed) in the fall, I hope to get in a much longer season.

1/21/12 – 10:30am Brighton OWS (w Brad and Ted). ~40 degrees. Huddled by bathrooms while Ted swam, then switched and Ted watched stuff while we swam. Snow, wind while swimming, raining when we got out. Earplugs and neoprene socks. Hard time warming up in car. (~10-15 minutes)

(Then lots of travel, including a week swimming in Egypt, a week not swimming in England and France with 9th graders, and over a week in Santa Cruz with friends…)

4/21/12 – 11:30am Brighton Beach Swim. 52 degrees. Swam with Cara towards pier to the short jetty, then back other way to white building (into very strong current) and back. 1 hour total. 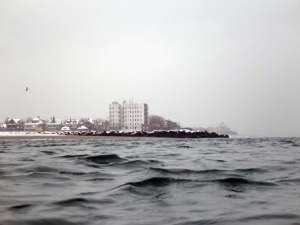 January 29th, 2012 – Brad and Eli taking their sweet time, perhaps trying to soak in a little sunshine before the swim. 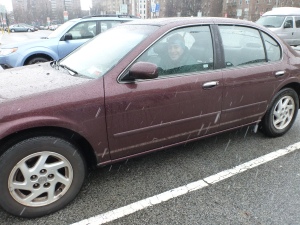 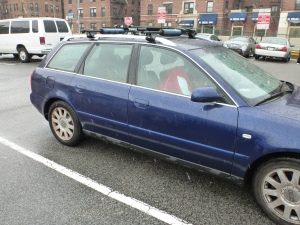 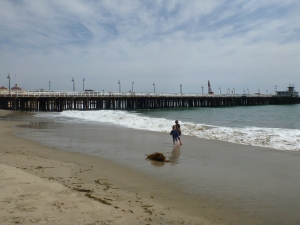 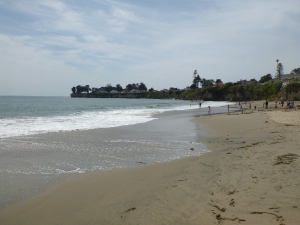 April 14, 2012 – Giles’s ocean sled feeding station.  He pulled this behind him as he swam alongside Brad during parts of Brad’s crazy 3.5 hours in 50°F water.

Giles heading out to meet Brad with the sled 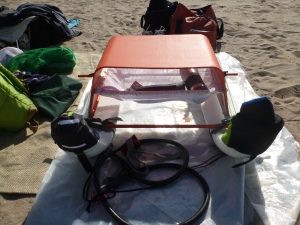 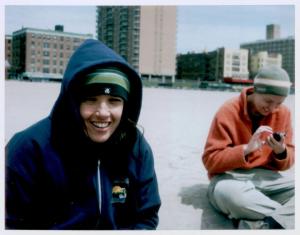 After three weeks in a row of swimming for an hour or more, I had to admit that the winter was over. The water got up to a balmy 55, and I no longer needed my post-swim layers of long-underwear, fleece pants, down coat, winter hat, and fleece neck wrap. (Note that 55 degrees F is actually still pretty cold, but after a winter of swims in the 40s, my body seems to be somewhat acclimatized.) Big thanks to Brad for helping me to get acquainted with swimming in the ocean in the winter. He swam every weekend the previous winter, too, in training for his English Channel crossing. He said that he continued to swim through this winter out of habit, even though he doesn’t have any big, cold-water swims planned for this season. I’m so hooked, I’m already looking forward to swimming through next winter.

Highlights of late-May and June include the Great Hudson River Swim, kayaking clinics, and the Stars and Stripes Aquathon. Posts to come.

3 thoughts on “Ocean Swimming Through the Winter”

Got this far? Please consider leaving a comment... Cancel reply

I learned to swim as a wee one from my dad, who didn't really swim himself, but was tall enough and encouraging enough to send me back and forth to the side of a pool. There were also the terrifyingly wonderful trips on his shoulders out into crashing ocean surf, which instilled in me a fear and respect for the rising and falling, tempestuous beast, on whom he repeatedly admonished us kids to never, ever turn our backs. Read more...

Worth a look, listen, watch, or read